I am a nominee for the Best Australian Blogs 2012 Competition and voting for the People’s Choice award has commenced!

You do not have to be an Australian to vote and you can vote for more than one blog (you need to tick ALL of the blogs you wish to vote for all at once before submitting on the final page).

Click on this link here, tick the blogs you wish to vote for, then click through and submit your vote!

Thank you for your support! 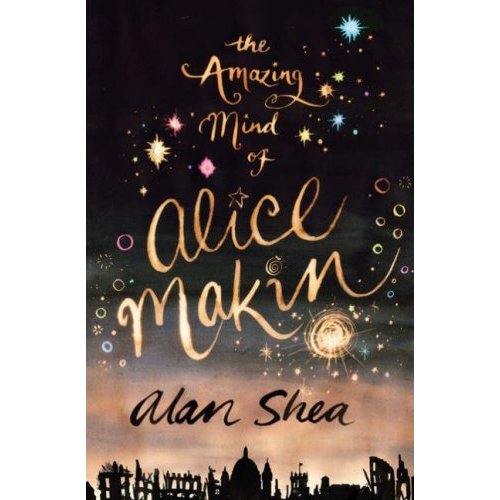 Summary: In the bleak post-war landscape of 1940s London, Alice’s imagination brings colour and excitement to the old bomb sites and rubble-littered streets. Yet in the company of her new friend Reggie, the imagination that drives her stories and provides them with entertainment becomes more real, and what is imagined becomes reality.

Favourite Scene: When Alice imagines the local bullies getting stuck in bubble gum – there is a gorgeous childish aspect to the humour that I found endearing!

Favourite Character: Norman – his imagination might not turn real, but it was so real for him (and Alice’s perspective indulged this) that I couldn’t help but remember playing with friends and anything – through our imaginations – was possible. Maybe that’s why I’m a writer now …

Review: There were, without a doubt, some gorgeous aspects to this novel. The characters are children – not teenagers wanting to be adults, but children who want to play and enjoy themselves. This is a childhood when old tins are full of treasures and the neighbours look out for them. The nostalgia for childhood is obvious in the narration – the innocence of a child, the power of the imagination, the desire to belong – which I found irritating at times because I saw it as cliché. While the plot was slow-moving and the ending very rushed and abrupt (please don’t tell me there’s a sequel … you know how I feel about sequels for the sake of sequels), the children and their imagined games and adventures were thoroughly enjoyable. I would be interested to know a child’s perspective of the book, as I feel my opinions around representations of childhood have given me bias against the novel. I simply cannot rave about The Amazing Mind of Alice Makin, but I can say that Norman is adorable! 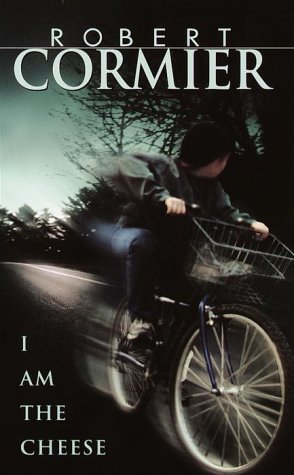 Book Title: I am the Cheese

Summary: As he cycles to Rutterburg with a present for his father, Adam Farmer tells of the people he meets along the way and reflects on his life and the events leading up to this bicycle journey through flashbacks. Interspersed with transcripts of recorded interviews, there is a mystery to be solved as to who Adam really is, and what is waiting for him at the end of his journey.

Favourite Scene: When Adam arrives at Rutterberg. I gasped aloud; it left my mind reeling!

Review: This has been on my “to read” list for a long time – and I’m ashamed to admit how long I took to actually get around to reading it. I loved The Chocolate War, so I don’t know how I am the Cheese escaped me for so long! It is now on my “must read” list for many reasons. One of the things I love about Cormier’s writing is the sense of hopelessness and despair that is maintained throughout his novels; there is no happy ending, the characters simply live and – somehow – get by (if they’re lucky – and usually they’re not). In I am the Cheese, Cormier crafts an intricate tale of a young teenager seeking answers to his identity as he cycles to deliver a parcel to his father. With flashbacks of his life before commencing the journey, we read of his uncertainty around who he is, where his family is from, and the truth behind the strange interview transcripts that are interspersed in the novel. When I finished the book my mind span, my heart pounded, and I may have shed a tear or two.

This evening I stood in jaw-dropped amazement as a parade of men walked past me carrying strange contraptions on their shoulders, their flesh pierced with hooks and skewers that went through their lips, tongues, backs, sides, chests … even their arms and legs were not spared.

ThaiPusam is celebrated at the full moon of the 10th Tamil month – which happened to be today here in Singapore (you can find more information here) – and involves a parade of men (supported by the chanting, singing and clapping of their friends and family – and the watching crowd) carrying Kavadi which often features an elaborate design of piercings and towering decorations (you can read more about exactly why they do this here).

But what really had me in awe wasn’t the elaborate Kavadi or pierced flesh – it was the fact that this is something that these men do every year as a sign of their faith. Me? Well … Is there anything in the world for which I would put myself through this kind of pain?

I consider myself a fairly passionate person – I get excited over things I believe in and can become quite vehement in debate when arguing something that is important to me. I have a set of beliefs that I would call spiritual but they’re vague enough that I don’t practise a religion or believe in a set code of ethics. I know what I, personally, consider right and wrong (and what rests in a shady grey area), and as long as I’m permitted to continue believing what I believe I won’t hinder anyone else in their beliefs.

But would I put myself through serious pain as a demonstration of my faith?

And what is this faith that so many people seem to have – and I, apparently, don’t?

On the bus on the way home I watched the streets pass from the bus window and had visions of needles piercing flesh and Hindu gods looking at me from feathered frames adorned with flashing lights. I considered the very meaning of the word faith. In fact, I considered a lot of things.

I had a bit of a funny day today. By funny, I mean that if it weren’t for the fact that I had organised to meet a friend in Little India I probably would have stayed in bed with the covers over my head. I felt flat. Restless. A tad apathetic. I wanted to write but I couldn’t focus. I wanted to cry but I couldn’t be bothered wiping my eyes. Then I watched a link that a friend shared with me – it’s long, but well worth viewing.

If I externalise my Genius, allow my Muse freedom to exist as a separate entity to me, as a holy and amazing being who influences me but isn’t me … Wow … Life suddenly got a lot easier. I am, after all, only human. The pressure placed on me to be clever, creative, and (im)perfect is suddenly transferred to that beautiful chaotic mess in the corner of the room – my Genius.

I let the tears out. I let out the grief that I felt over not having written anything of substance today … and I forgave myself. I haven’t had a chat to my Genius yet, but it was with good feelings that I set off to Little India to watch crazy people lugging heavy ornaments stuck into their bodies.

So sitting on the bus, I thought about faith. I thought about Genius (who was sitting next to me nursing my camera and doing his utmost not to play with the buttons) and I thought about skewers and hooks and the pained expressions I saw on some faces, the euphoria I saw on others.

I thought about my Genius. In fact, I’m looking at him now. He’s smiling at me and you know what? I have never had faith in my own abilities – I am too full of self doubt. To externalise the creative urges that come and go, to separate myself as a mortal and very human being from the creative and turbulent Genius … this division into two entities – my Genius and my Self – liberates us both.

It’s hard sometimes because there are days when I feel like I really am walking on nails just to get a sentence onto a page. But that’s just it: I’d walk on nails for my creativity, for my ability to write …

I finally have complete trust in something: I have faith in my Genius.

Summary: Hayley has lived what feels like an eternity with her grandparents and, after upsetting her grandmother, is sent away to her Aunts and cousins in Ireland where she discovers she is not as alone as she thought she was. Traversing the mythosphere and contemporary England/Ireland, Hayley is drawn into The Game which, in turn, reveals the truth behind her parents’ disappearance and her isolated upbringing.

Favourite Scene: I loved the scene when Hayley first enters the mythosphere and witnesses the different myths taking place. Mythological stories have been well researched and recreated in this novel, and the first experience Hayley has in the mythosphere is a solid promise of things to come.

Review: Diana Wynne Jones is considered a bit of a legend (mild understatement) in terms of writing magic and fantasy novels. I was first introduced to her work in the form of Howl’s Moving Castle a few years ago and fell in love with the detail she puts into every character and the beautiful descriptions she uses to create intricate settings. The Game, however, is my favourite of all her books – it is a testament to well-researched writing and a style of magic that is unique to the talent of Diana Wynn Jones. The appropriation of Greek (and a little Russian) mythology made for a unique story that may even be considered a tribute to the mythologies that influence fantasy writing today.