Book Title: When We Have Wings

Summary: Only the rich and powerful can afford to fly – the cost of the surgery, drugs, and gene manipulation is too great for anyone else. So why does Peri, a poor girl from the regions, have wings? And why would she throw it all away? Private investigator Zeke delves into the mystery of Peri’s disappearance and unravels a dark world beneath the glamourous facade of flier culture and politics.

Favourite Scene: Every scene describing what it’s like to fly – wow!

Review: This is a stunning novel – beautifully written and gorgeous with its imagery, the novel is more than just words on a page. The implication of technological advancement and how it will influence class (and even generation to generation) is represented through the ‘haves’ (wealthy fliers) and the ‘have nots’ (everyone else). The cost of wings, however, is more than just monetary – as Zeke finds out. What makes this story compelling is the narrative, split between two voices. It begins with a third person narrative from Peri’s point of view and then alternates between this and Zeke’s first person narrative of his investigation into her disappearance. Within these perspectives we have Peri’s search for truly understanding what it means to fly, and Zeke’s struggle to make the right decision for his son, knowing that whether or not his son is successful in the future could well be defined by whether or not he has wings.

The plot is, essentially, quite simple and straightforward. What I really loved about this novel was the obvious amount of research that went into its composition. Not only do we have considerations for science but also for the very nature of flight. Being able to fly like a bird means having lighter bones, burning more calories, and learning how to read the sky. Having a population of people who can fly changes how buildings are designed and constructed, how clothes are worn, and how we interact with others. The world constructed in the novel is intricate and flawless, and the characters are complex and flawed. It’s a beautiful combination!

There are subplots within the novel that weave together to create a sense that there is much more to come – not necessarily a sequel to the novel but definitely a real-life need to seriously consider the implications of technology and its role in creating (or at least redefining) human life – if we can choose a child’s eye colour, why not choose to give them wings?

I am gushing, I know. I really loved this book – it is a unique novel that stands out in a sea of rather predictable YA fiction and I cannot recommend it enough! 5 commas!

Summary: This is a world where animals no longer exist. Contaminated by the red-eye plague, surviving animals were destroyed from fear of further outbreaks and mutations of the disease. Locked away in a special school, Kester’s only companions are the varmints that have remained; cockroaches and moths are the only members of his social circle. Unable to speak, he practises a silent speech in his mind – but then he discovers he is heard. And he, too, can hear and understand the cockroaches and moths. Carried away from the school to the wild, Kester slowly discovers some of the lies and deceit that surround the red-eye disease and disappearance of the animals, as well as his own disappearance from his father and home.

Favourite Scene: It’s hard to choose because there weren’t really any “stand-out” scenes for me … yeah, I really can’t choose one. Sorry!

Review: This was a sweet book that I would happily recommend to a mature and confident reader of 9 years, up to a young adult reader who wants to further explore the dystopian setting so popular in today’s books for young people. By focusing on animals and creating a protagonist who can talk to them while the natural world is coming apart, readers are offered a first-hand account of what the “end of the world” means for nature and its inhabitants. This was an approach I really enjoyed as the animals were given their own voices to share their perspectives. At times the dialogue, which attempted to use realistic pauses and hesitations as well as accents, was labourious, often distracted me from what was being said as I was caught up working out how it was being said. This is my main criticism of the novel. Torday has used a simple but effective quest-narrative in a dystopian setting; astute readers will find the novel predictable and, at times, mundane. However readers who appreciate entertaining novels with uncomplicated plots and characters will thoroughly enjoy this story. I wasn’t sure if I should give this a three or four comma rating … I was tempted to go with 3 1/2 but I refuse to do halves! So three it is!

I was provided with a review copy of The Last Wild by the Book Depository. You can buy your copy here. 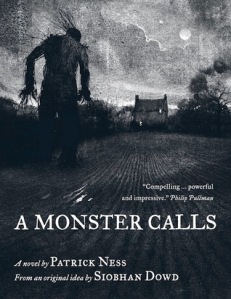 Summary: Conor has recurring nightmares of screaming and darkness, and wakes one night to find the yew tree outside his house has transformed into a monster summoned, it claims, by Conor. The monster visits Conor and tells him three stories in exchange for Conor’s own story of his nightmare. In between the monster’s visits, we witness Conor’s grief as his mother battles terminal cancer, the bullying and alienation to which he is subjected at school, and the struggling relationship between Conor and his grandmother.

Favourite Scene: The first story the monster tells and the perspectives he offers Conor. This novel is a story about grief and change as much as it is about the nature of story and understanding perspectives and the behaviours that result from this.

Review: I’ve been a big Patrick Ness fan since I read the Chaos Walking books (one of which I reviewed a while back). His talent as a writer is undeniable – and two Carnegie Medals don’t lie. I’ve had this book on my “to read” list for a while and eventually read it easily in a single sitting. I was left with a gaping ache that some books leave me with, an ache for the story and the characters, and an ache and desire to share the book with the world and make sure it is given the attention it deserves. Read it. Read it. Read it.

At its core, A Monster Calls is about terminal illness and grief and change and the horrid experiences that arise from all of this. Conor has to confront what it means when his mother fails to get better from the treatments, and what it means to grieve and mourn for someone. Furthermore, he has to acknowledge the changes that will take place – changes he cannot control. On top of this, there is the “special treatment” he keeps getting at school and at home which, rather than being comforting, further alienates him from others. The story is, in its own right, a brilliant concept and beautifully executed with Ness’ artistry as a storyteller and Jim Kay’s evocative illustrations.

And yes, you will need tissues.

You can buy A Monster Calls by Patrick Ness here.

Summary: In 2044 the world is a grim place – overpopulated and under financed, there is little hope for the future of the people living in it. Respite from this world comes through OASIS, a virtual utopia that usurps reality. Here you can attend school, go to work, and be entertained – and this is exactly what Wade does. Like many, he is searching for a way out of his grim and depressing reality, a way that is attainable but virtually impossible; OASIS creator James Halliday has hidden puzzles within OASIS, but that was years ago and no one has found any clues or signs that the prize will ever be won. The prize? Halliday’s fortune and ultimate control over OASIS. When Wade stumbles across and solves the first puzzle, the race to the final prize becomes more than just a game.

Favourite Scene: Too many. I especially loved the nature of the second puzzle! (Go on, read the book.)

Favourite Character: Ogden Morrow – he plays a minor role but he seems like a pretty cool guy.

Review: Love. Love. LOVE. This book was recommended by the ever wonderful Katy and the promise of ’80s pop-culture and gaming references was too good to refuse. And I am so glad I got my hands – and mind – on this book. In typical Stef-style, I churned through the book in a single sitting, absolutely absorbed by the characters, setting, and plot. The narrator’s voice was unique and easy to follow, so much so that it was easy to imagine this was a conversation being had over coffee.

The world constructed in Ready Player One was eerily believable. As is the case with most good dystopian novels set in “the not-too-distant-future”, Cline utilised the harsh realities of the early 21st Century to create a frighteningly plausible future. The book was published in 2011 and this makes the dates and characters especially relevent right now – the setting is 32 years away and the generations depicted in the novel are uncomfortably familiar. Referring to his aunt, Wade laments:

“Her generation had it the hardest. She’d been born into a world of plenty, then had to watch it all slowly vanish. More than anything, I remember feeling sorry for her.”

The characters were it. I could easily imagine some of my gaming friends sitting in and contributing to the conversations that took place in the book, and the ’80s pop-culture references and gaming scene were nerd-tastic.

I’m keeping a vague list of books I’ve reviewed this year that have been added to the “If you read ONE book this year” pile (let’s face it, I’ve said it a few times) and Ready Player One is definitely up there.