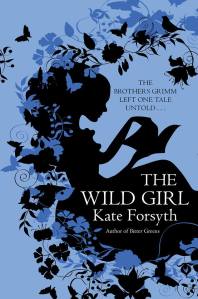 Summary: Believed to be the source of many stories made famous by the Grimm brothers, this is the story of Dortchen Wild, the woman behind the fairy tales. Set against the backdrop of Napolean Bonaparte’s attempt to conquer Europe, this is a story of stories that follows the love between Dortchen and Wilhem Grimm – and Dortchen’s own story of resilience and hope.

Favourite Scene: I know I say it all the time, but I have so many favourite scenes to choose from in this book – the opening scene is particularly beautiful.

Favourite Character: Dortchen. I try not to choose main characters as ‘favourites’, but I cannot get past this incredible woman.

Review: Stunning. I knew that I was in for a treat after reading Bitter Greens but this book was just … stunning. It took me a little while to pick it up from my table because I was nervous – I had high expectations and I was worried it wouldn’t meet them or, worse, it would exceed my expectations and come to an end all too quickly. It was one part the latter and all other parts breathtaking, so while I caught my breath I stayed in the world of The Wild Girl for just a little bit longer …

It’s not all beautiful and wonderful – in fact, sometimes my stomach churned and I felt physically ill because of some of the things that happened to Dortchen.What is incredible is Dortchen’s spirit – wild in every beautiful sense of the word. Every character earnt their page-time and every detail contributed to a magical tale. Ultimately Dortchen is empowered, presenting a strong and resilient character with a ‘wildness’ that all young women should be encouraged to have: independence, compassion, determination.

I am rapidly becoming a huge fan of historical fiction – and this book sets a new benchmark in telling “untold” stories from history. Forsyth’s depth of research is commendable – it was a brilliant factor in Bitter Greens but she reaches a new level in The Wild Girl in terms of painting accurate (and deeply fascinating) pictures of the past. The result is a plausible (and enchanting) story for Dortchen and her relationship with Wilhelm. I loved the intricate detail of all of the characters, and the magical way Forsyth wove history into her narrative.

I was thoroughly lost in the narrative well into the early hours of the morning, and finding my way back was part of the enchantment. 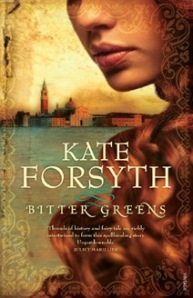 Summary: A retelling of the Rapunzel fairytale, Bitter Greens explores the intertwining stories of three women: storyteller Charlotte-Rose de la Force, exiled from the court of Louis XIV, La Strega Bella Selena Leonelli, obsessed with maintaining her youth and beauty, and Margherita, a young girl held captive in a tower.

Favourite Scene: So many! Some are so haunting that they are prominent in my mind, not as favourites but as scenes I simply cannot forget. I loved – I can’t say, it’s a spoiler!

Favourite Character: Selena – this is a ‘wicked witch’ you can feel for.

Review: I love a good ‘flawed heroine’ and Bitter Greens delivers three strong female characters, each beautifully written as believable, sympathetic characters. They are flawed, they are scarred, they are desperate for their stories to be told. It is more than a fairytale retelling – history and elements of magic are woven into the narrative so intricately that the darkest of spells is believable. Every character in the novel exists with a purpose, and no story is left unravelled. The attention and detail given to historical figures is demonstrative of an extensive amount of research and consideration not only for the person but the people who would have existed around them.

Sixteenth century Venice is, itself, a character richly portrayed through elegant prose. Renaissance Venice rose up from the pages and I walked down its streets with a fresh perspective of one of my favourite cities – no easy feat considering I’ve been there three times.

Kate Forsyth is one of my favourite authors, and I credit her Witches of Eileanan series for my love of fantasy. She is one of the writers who most influenced teen-me when it came to both reading and writing. Her two most recent books – Bitter Greens and The Wild Girl (review to come) – have given adult-me renewed love for her work. 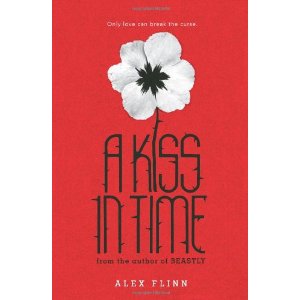 I really enjoyed Alex Flinn’s Beastly so I was quite eager to read A Kiss in Time particularly as it is a modern day retelling of ‘Sleeping Beauty’, complete with mobile phones and misunderstood parents/teenagers.

‘Sleeping Beauty’ is a fairy tale about a princess who is cursed at birth to prick her finger on a spindle, falling into a deep sleep – along with her kingdom – and only pulled from this enchantment by a prince’s kiss. Good fairies, bad fairies … princesses, princes … you know the drill.

Unfortunately, I was disappointed. I was expecting some clever originality and refreshing ideas but despite the alternating first person narrative between Talia and Jack, there was nothing that made me go ‘wow’. I enjoyed it. It was light and somewhat entertaining. Maybe a thirteen year old would find it more exciting than I did. Don’t get me wrong – the princess pricks her finger and falls asleep, and three hundred years later an American finds her and kisses her. She runs away with him to America, disguised with a false passport obtained a little too easily for my liking. Granted, a lost kingdom is also a bit farfetched, so let’s be open with our imaginations.

Where the fairy tale ends, however, is where the novel really begins. The kingdom is suddenly pulled from the past into a pretty crazy future (i.e. today) and Talia gets on a plane to America and engages in all kinds of “typical” teen American pursuits while trying to make Jack fall in love with her – Jello shots being the most prominent in my mind. It did get better towards the end, however, and I liked the representation of the ‘evil fairy’ and the transformation of the relationships between the teens and their parents, even if it was pretty typical of teen fiction.

Maybe Cloaked will be more enjoyable …

‘Beauty and the Beast’ is one of my favourite fairy tales – a beautiful daughter is sent to live with a Beast because her father has stolen a rose from the Beast’s garden, only to fall in love with the creature she once feared, thus casting away a spell and discovering the Beast is really a handsome and wealthy man, and they all live happily ever after. Aw! Both of these books written by Robin McKinley appropriate this classic fairytale, however they were written twenty years apart. I read Beauty first, since it was first published in 1978. Rose Daughter was first published in 1998.

I love Robin McKinley’s writing and comparing her two retellings of  ‘Beauty and the Beast’ is like comparing chocolate cake to a brownie – they might look like they’re the same thing and even sound like they’re the same thing, but there are differences beyond the initial concept and if you want something to satisfy the chocolate craving you go for the cake (Beauty), but if you want something to give you an intense burst of flavour with something you didn’t quite expect (Is that walnut or pecan? Can I detect coffee?), then you swipe up the brownie (Rose Daughter).

Beauty is a beautiful retelling of the classic. This is not the first McKinley novel I have read, so I did have very high expectations – and I was not unsatisfied. McKinley has a beautiful gift with story telling and I found this to be a lovely story that was, in every way, a fairy tale. Simple entertainment is probably the best way to describe this narrative. It follows the “standard” plot of ‘Beauty and the Beast’ in such a way that it is easy to be absorbed in the narrative. I would happily recommend it to anyone of any age – it’s a simple, magical, and faithful retelling with no crazy surprises but with a beautiful depiction of love, family, and friendship.

Rose Daughter is quite different, however. I would suggest that if you wish to read both, leave a long gap between the two. Obviously elements of the plot will be similar – they’re both a retelling of the same fairy tale, but I think the magic of Rose Daughter would be most appealing if you waited and let some different stories shake up your imagination, rather than letting it be lazy and turn to the same concept with seemingly slight variation. Because it’s more than slight, and you might miss it if you read it quickly and skip through it with the opinion it will be the same sort of retelling.

Rose Daughter is original –  in fact, it gives me new appreciation of the word ‘original’! McKinley transforms the story with such beautiful imagery and symbolism that I was inspired to buy a cottage and grow roses – and I’m the kind of person who can barely keep a hardy pot plant alive. This is not your basic ‘Beauty and the Beast’ story and McKinley draws you in to a rambling, powerful narrative. Rose Daughter is much more intricate and there is a detailed construction of characters in terms of their history and development that makes the magical and fantastical elements believable. I expected to roll over and find a rose garden on my pillow, and I don’t think I would have blinked if a greenwitch appeared at the foot of my bed. I would suggest this book for all older readers – it tends to be categorised as ‘young adult’, but I wouldn’t stop there. This is a fairy tale for anyone who wants to believe in fairy tales again.