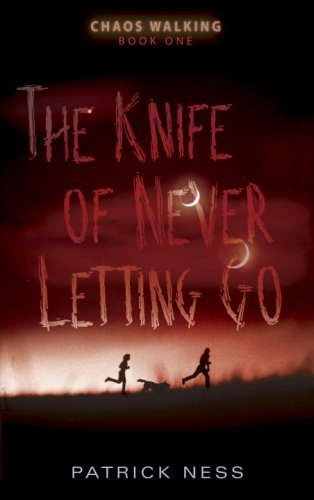 Summary: This is the first book in the Chaos Walking trilogy and is set in a futuristic world on another planet, called “New World”. The native Spackle are blamed for releasing a germ that killed all women and left the men with the Noise, which is a constant barrage of information as men can hear one another’s thoughts all the time. Todd is the only boy Prentisstown, and will not be a man until his thirteenth birthday. A month before Todd is to become a man he flees Prentisstown, only to discover the town does not want to let him go and he must outrun an army if he is to understand the many secrets that have been kept from him.

Favourite Scene: My favourite is actually a major spoiler … So my second favourite … Nope, that’s a pretty bad spoiler too. Hrm … OK … My favourite “thing” about this book was the representation of the Noise – the visual depiction of the Noise on the page was very effective and revealed a lot about the different male characters. I really appreciated the use of formatting to give the Noise “character”!

Review: I opened this book and saw words like ‘thru’ and ‘stayshun’ and shuddered. Then I read the first page. And the second. And, typical of my reading habits, I closed the book in the early hours of the morning. Last week I gave a pretty brutal review of Eve … this week, I can gain some literary karma points with absolute OMGTHISISAWESOME raving about Patrick Ness’ first book in his amazing series. The narrative is nothing less than brilliant. Despite being told from Todd’s perspective and thus lending towards his point of view, the characters are believable and each have their own strong voices. The language – including the “ain’t” and the “thru” and the numerous variations on spelling – is honest in its representation of a young, uneducated boy trying to articulate his experiences. In The Knife of Never Letting Go the character of Todd becomes so real that you cannot help but trust him, cheer for him, cry for him, and feel a terrible sense of anxious anticipation as he tries to reach Haven. This sort of book is exactly why I think young adult fiction should be given a new name more appealing to “adults” – it’s not a book only for “young adults”. If you’re new to dystopian settings, read this book. If you appreciate unique characters and use of language, read this book. If you enjoy a good story, read this book. If you have air in your lungs, read this book. The only negative thing I could say about The Knife of Never Letting Go is this: if you don’t have the other two books in the Chaos Walking trilogy beside you while you read the first, you may find yourself wandering the streets at 3am searching for a 24 hour bookstore.

7 comments on “Book Review: ‘The Knife of Never Letting Go’ by Patrick Ness”